Bitcoin fell as concern over China and caution ahead of this week’s Federal Reserve meeting weighed on U.S. stock index futures. Speculation that the U.S. government may declare stablecoins as a risk to the financial system could be adding to uncertainty in the crypto market.

The top cryptocurrency by market value is currently priced at $44,800, down 5% on the day. The broader market is a sea of red with ether, cardano, and solana nursing losses of as much as 7%, CoinDesk 20 data show.

Futures tied to the S&P 500, Wall Street’s main equity index and the global benchmark for risk assets, are trading 1% lower alongside similarly sized losses in European stock indexes and shares in Hong Kong and Japan.

“Investors look to be taking risk off the table on fears that [a] crisis at China Evergrande Group may become a systemic problem to global markets,” Pankaj Balani, CEO of Delta Exchange, said. “Markets will also be looking at the Fed commentary later this week to make sure that there are no changes in liquidity from the central bank.”

Evergrande fell more than 10% in Hong Kong early today, taking the year-to-date drop to 85% on concerns the cash-strapped property giant might default on $83.5 million in interest payments due this Thursday. Chinese authorities have already told major lenders that the company is likely to miss payments. While some observers have called the Evergrande crisis China’s “Lehman moment,” Messari’s Mira Christanto says such fears are overblown.

The two-day Fed meeting, which concludes on Wednesday, will be keenly watched by investors for clarity on the central bank’s plans to scale back, or taper, the liquidity-boosting stimulus program.

Communications from the Fed members have been hawkish in recent weeks, with many calling for a beginning of the taper before the year-end. Bitcoin and other asset prices, in general, could face selling pressure if this week’s meeting confirms that tapering will begin in October or November.

The greenback is rising ahead of the Fed meeting, reflecting a flight to safety and speculation the central bank would signal October or November taper. The dollar index, which tracks the currency’s value against major fiat currencies, has jumped to a one-month high of 93.34, extending a two-day winning streak, according to TradingView.

Aside from macro factors, impending regulatory action on stablecoins – the dollar-pegged cryptocurrencies that promise stability and act as a gateway to crypto markets – could be adding to selling pressure around bitcoin.

An article published by The New York Times on Sunday said U.S. regulators are concerned that stablecoins may become a source of volatility and may bring the dollar-pegged currencies under regulatory purview by declaring them as a risk to the financial system, or treat them as securities, money market mutual funds or as banks. While Washington’s discomfort with stablecoins is not new, the fact that mainstream media outlets ran a cover story suggests regulation is coming soon.

A recent Bloomberg report said officials are considering launching a formal review by the Financial Stability Oversight Council into whether stablecoins pose an economic threat, a process that could bring more severe oversight on the rapidly expanding industry. The total market capitalization of all stablecoins, including tether, has seen a near 10-fold rise to $115 billion over the past 12 months. A regulatory crackdown may bring short-term pain to crypto markets.

These issues, coupled with the quarterly bitcoin options expiry due this Friday, may keep the cryptocurrrency volatile this week. Balani said, however, the underlying trend will remain bullish while bitcoin holds above $40,000.

Past data shows September dips pave the way for larger bull runs, particularly those seen after a halving year. Bitcoin underwent its third mining-reward halving in May last year. The first and the second halvings took place in 2012 and 2016. 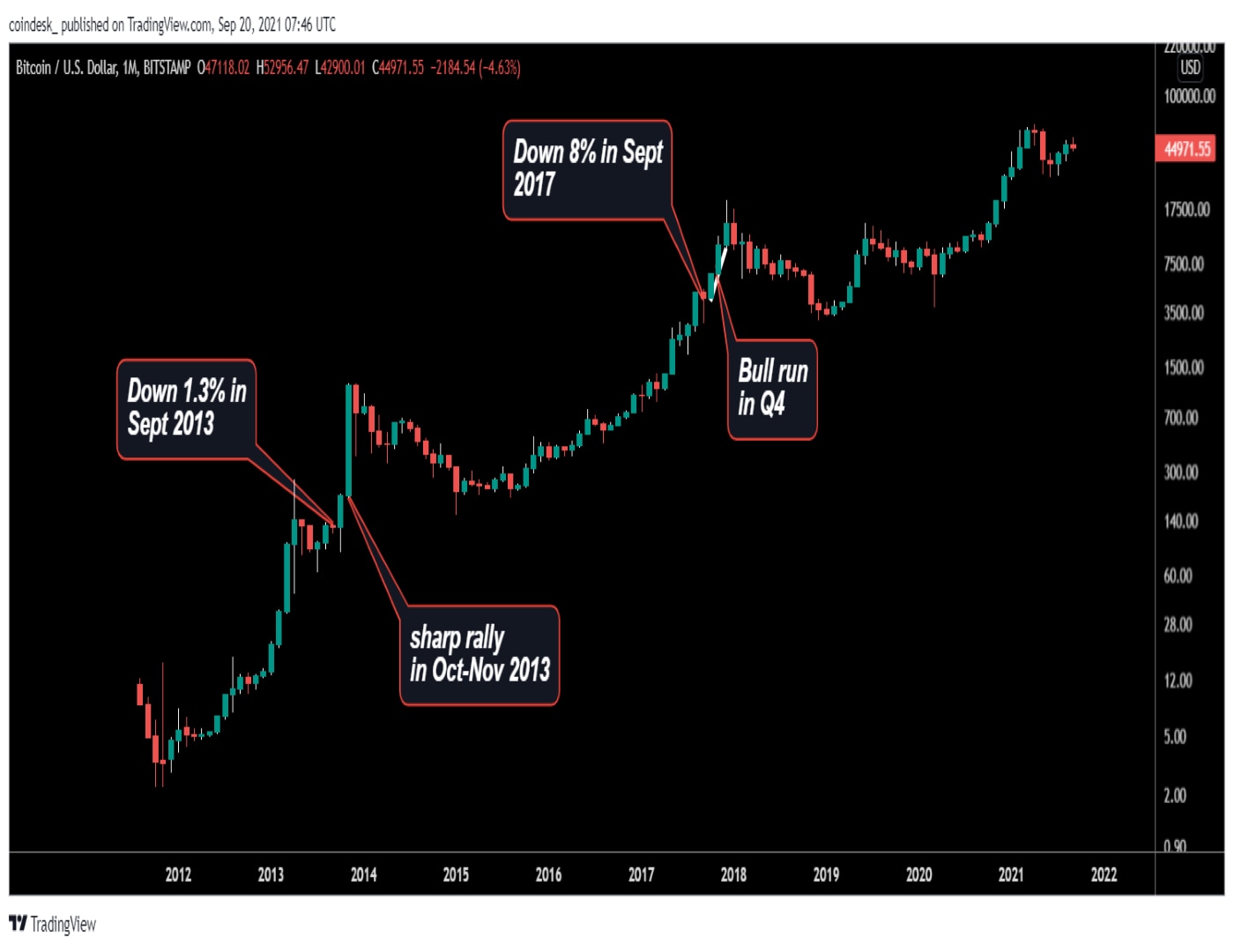 A trader essentially takes a loss on both the collateral and the futures contract. Thus, margin requirements increase…
byRichie
Read More

What the ‘Pandora Papers’ Mean for Bitcoin

This episode is sponsored by NYDIG. Download this episode On today’s episode, NLW breaks down the latest in a…
byRichie
Read More

But even if the speculative bubble pops, it seems fair to say NFTs offer something of value –…
byRichie